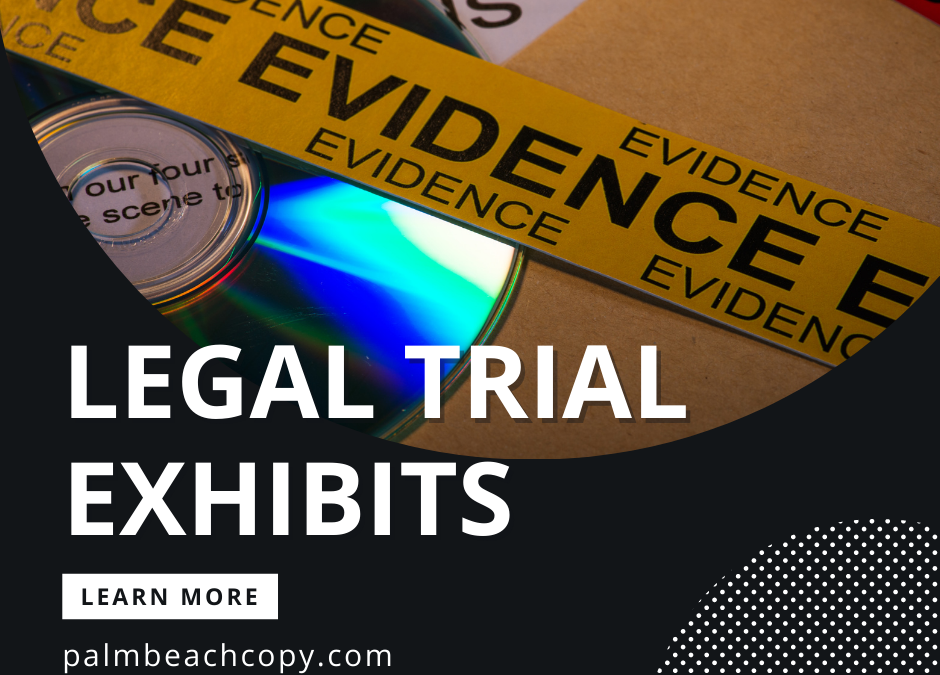 A trial exhibit is an artifact that serves as evidence in a legal proceeding. Legal trial exhibits may include passages of texts, charts, and enlarged photographs.

Legal exhibits allow attorneys to provide tangible support for their arguments during legal proceedings. They speed the legal process and help juries and judges reach decisions.

Early Use of Legal Trial Exhibits

The use of evidence in trials dates back centuries in United States law and earlier British legal proceedings. Early advocates did not have modern technology, but they had many of the same goals as modern lawyers: to introduce evidence to the court and describe evidence in a compelling way.

The presenter can use written materials to guide witness testimony, often asking witnesses to read passages to “refresh their memory” during the trial. Expert witnesses might interpret or identify an exhibit.

Audiovisual evidence, including witness reading of testimony, can evoke emotions. For example, the counsel for a plaintiff in a personal injury case might introduce an exhibit at trial showing bruises, wounds, or other physical evidence of harm.

Sometimes a judge or jury can more deeply understand the facts of the case if they can experience or participate in an interaction. One of the most famous interactive exhibits was when the defendant O. J. Simpson tried to put on a glove found at the scene. Jurors may have seen his inability to put the glove on as exculpatory evidence in the trial.

Responsibility of the Presenting Attorney

The judge will rule on which evidence someone may use during the trial.

The opposing counsel can object when someone tries to introduce legal trial exhibits. They could object based on the prejudicial nature of the exhibit, its validity, or other factors. Counsel can also object when opponents present exhibits—for example, if a description is misleading.

Local rules for introducing evidence might vary between courts, with different procedures in federal court than for a state court.

Preparing exhibits for trial is more complex than in the early days of the legal profession. Every exhibit should be polished, clear, and readable at a distance.

When legal representatives present evidence to the court, every document in your exhibit list must be as clear and crisp as possible. Every photo exhibit or video presentation should be clear for easy identification anywhere in the courtroom. Contact Palm Beach Copy Service at 561-655-2838 for quality printing of legal trial exhibits, including large print materials.

How Can We Help?